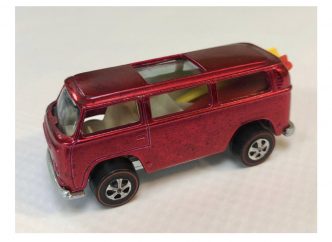 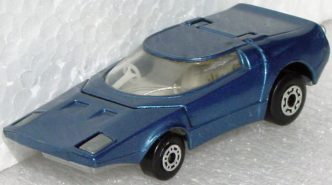 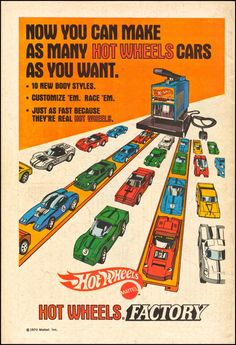 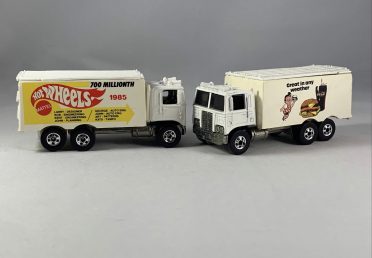 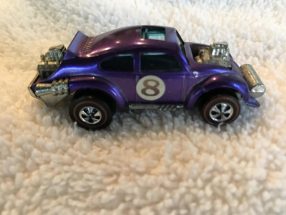 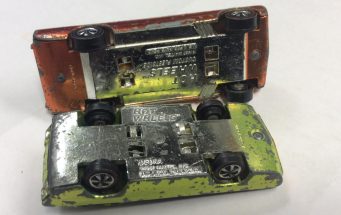 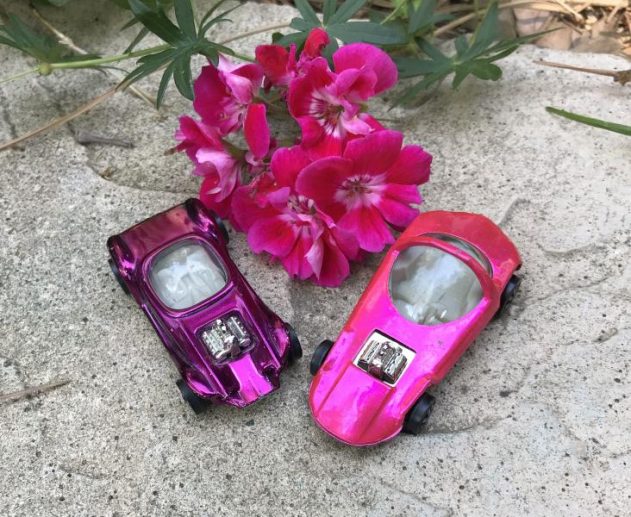 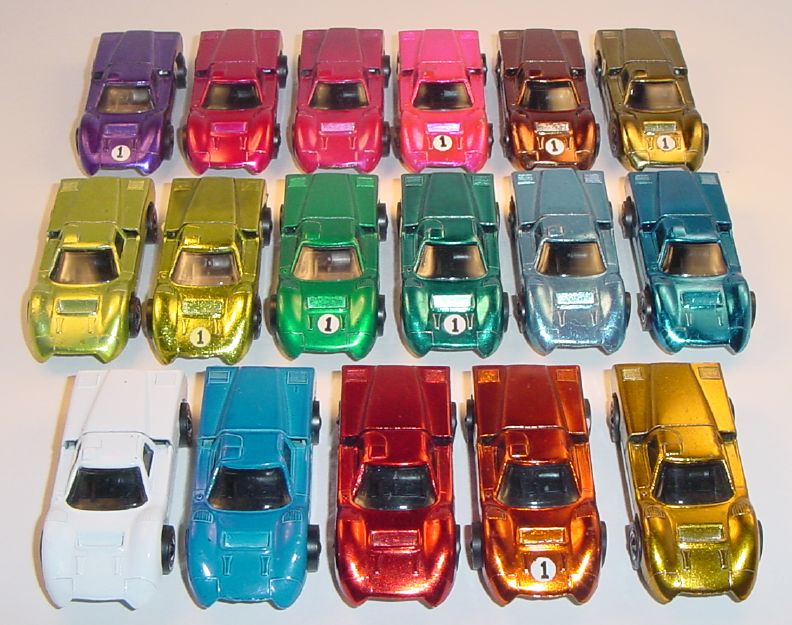 The Ford J-Car was one of the original 16 Hot Wheels cars that debuted in 1968.  It was originally packaged on the regular blister cards, but later came out in Grand Prix Series blister packs.

The real Ford J-Cars were the predecessors of the Ford GT40 Mk IV.  Completed in March of 1966, the first J-Car (J-1) weighed just over 2,600 pounds and was powered by a 500 HP 427 c.i. engine.  Although J-1 had the fastest times at the 1966 Le Mans trials, it was sidelined so that the Ford team could focus on their team of  GT40 Mk II cars.  This decision paid off with a 1-2-3 finish by Mk IIs at the 1966 Le Mans!  A second J-Car (J-2), built to CanAm specifications, crashed at Riverside in August 1966, tragically killing driver Ken Miles.  After extensive re-working of the chassis and development of a new body style, the J-Car officially became known as the GT40 Mk IV.

The Hot Wheels version of the Ford J-Car featured an opening rear hatch, racing numbers (#1) and rocker panel stripes, and were painted in various Spectraflame colors, as well as white enamel like the real car.  J-Cars were manufactured at both the US and Hong Kong plants.

There are a number of casting variations for US J-Cars, characterized most notably by the addition of a stop peg on later production run cars.  This peg, and a corresponding block where the transmission used to be, kept the rear hatch from opening completely.  Presumably, this change was made in mid-1969 since most of the ’69 Grand Prix cars also were first produced without the stop peg.  The earliest US cars have a letter “A” cast in the underside of the rear hatch.  A later production run features a backwards “B” at the same location.  “C” type J-Cars have the stop peg and block.  A small number of transition cars have been found in which a “B” type hatch was mated to a “C” type body.

Most US cars have black interiors but can be found with brown or tan interiors.  Some collectors believe that silver or gray interiors also exist but these may simply be due to variations in the plastic molding process.  Most brown interior cars are “A” or “B” type, suggesting that alternate color interiors were an early feature.  Two prototype J-Cars with white interiors have been discovered.  One of these appears to be a transitional car of some type.  All US cars have clear windows and unpainted metal bases.

A green US Ford J-Car with brown interior.

There are two major variations for HK J-Cars.  The first of these is a rare early run version with vents (or “louvers”) on the top of the rear hatch (similar to the US version) and a “hidden hinge” mechanism for the rear hatch.  Apparently, the first iteration of the hatch mechanism was too fragile so the casting was redesigned with a hardier hinge, and the rear vents were omitted.  Hidden hinge J-Cars were produced only in white enamel and light blue (“blue fog”) and are extremely difficult to find intact!

Unlike the US casting, HK J-Cars have top and bottom halves so that the base is painted the same color as the rest of the car.  Most HK J-Cars are found with white enamel paint, although they also were produced in Spectraflame red, green and light blue.

All HK cars have blue windows and black interiors.  Most HK J-Cars have four medium-size bearing wheels.  The rare exceptions to this are small front wheels on early cars, and cap wheels on late-run cars.  Note that there are two interior types: one (early) features a large steering wheel, and the other (late) has a small steering wheel.  Interestingly, HK cars have the steering wheel on the left, while US cars all feature right-hand drive!

The HK J-Car on the left has an early interior with a large steering wheel.

There are a few rare and very interesting versions of the Ford J-Car.  HK J-Cars in anything but white enamel are rare.  Of these, red is the most common but it too is relatively scarce.  Only a handful of green and light blue HK J-Cars have been found, and most of these seem to have come from Europe.  The early run “hidden hinge” cars are often found in Canada.  (Click “hidden hinge” to learn more…)

US-made Ford J-Cars can be found in most of the Spectraflame colors, although since they were not produced after 1969, are either very rare or non-existent in the second generation colors (e.g. hot pink, magenta, yellow, light green).  A “blue enamel” version of the J-Car was produced in limited quantity and is often rumored to have been a promotional car for the 1969 Indianapolis 500 (although no promotional material to support this has ever been documented).  The car is actually painted in blue Spectraflame over a white enamel base coat.  It is not known how many “blue enamel” J-Cars were produced but they are scarce, especially in good condition, and a clean example typically commands a price of several hundred dollars.  Nearly all “blue enamel” J-Cars have type “B” bodies & hatches, further suggesting that they were produced as a single small batch.

A “blue enamel” US Ford J-Car.

A hot pink US Ford J-Car.

A pair of antifreeze Ford J-Cars.

A red HK Ford J-Car still in the blister pack!

A rare early-run antifreeze US Ford J-Car in a “Cheetah card” blister pack.

A complete US Ford J-Car rainbow!