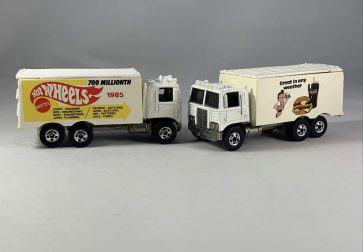 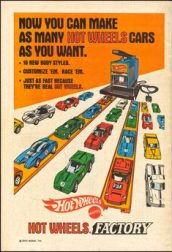 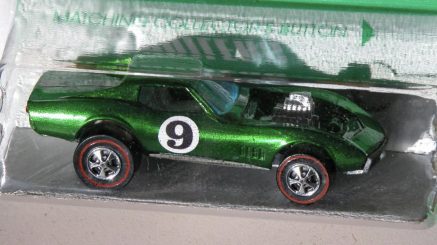 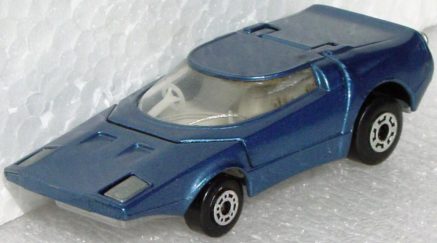 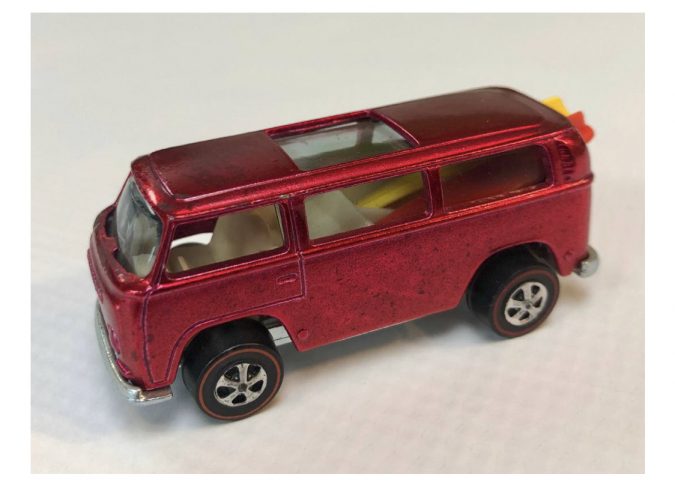 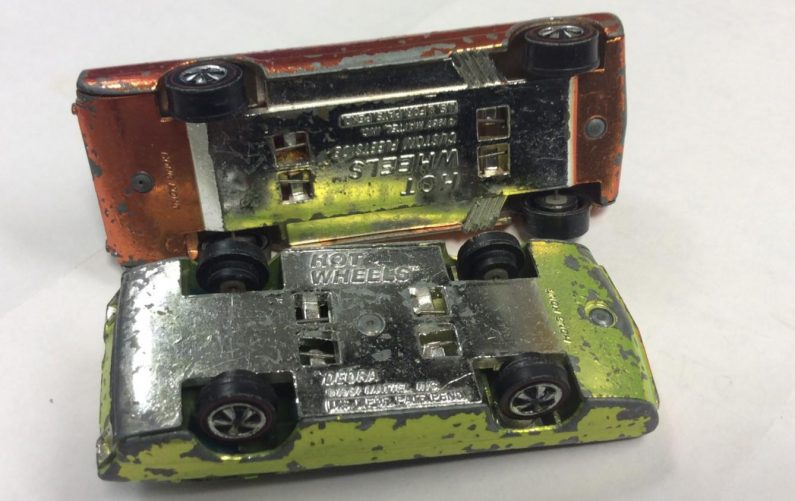 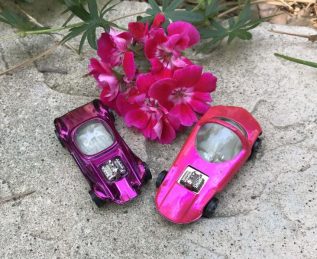 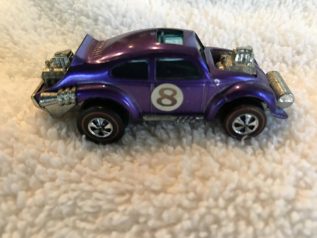 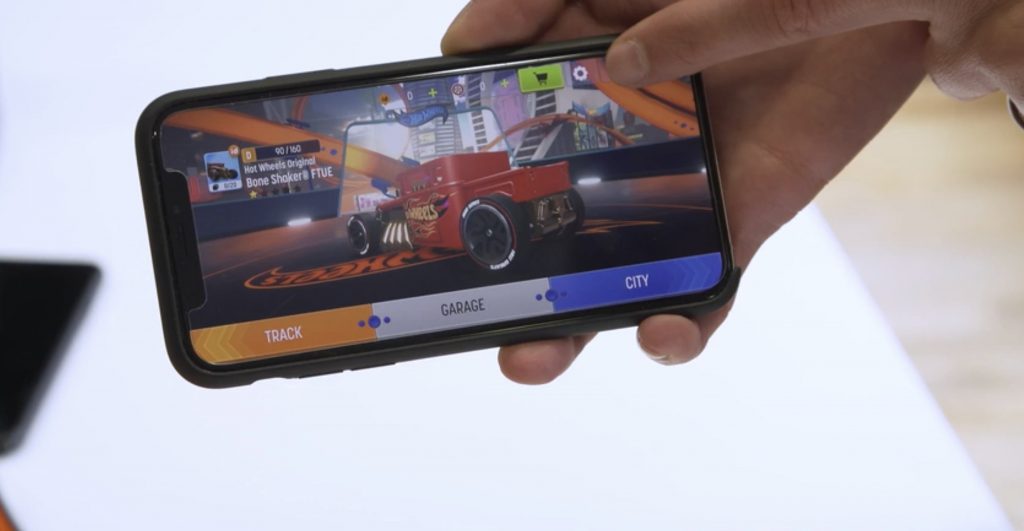 No more arguments over who crossed the finish line first

Hot Wheels has done a lot over the past few years to reinvent itself as a brand that’s more than just little die-cast cars. We’ve seen remote control vehicles, augmented reality racing and even cars you build yourself. Now the brand’s next step is to go back to its 1/64-scale roots, but with a decidedly modern twist. Hot Wheels ID look like normal cars, but each carries a tiny NFC chip in the bottom that makes it possible to track each car’s race time and speed. Now, when kids claim their car is the fastest, they have the data to back it up. 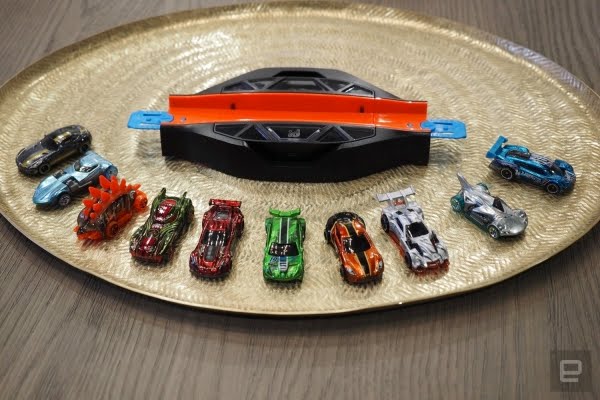 On its own, a Hot Wheels ID vehicle looks like a regular toy car. And it races like any other Hot Wheels vehicle too: Just place the car in a pump launcher attached to a track and press the large button repeatedly to propel the car without sending it flying off the course. But the track itself is now packed with tech, most importantly an NFC reader that counts how many times each car passes over it. That data is sent back to the new ID app for Android and iOS via Bluetooth LE, calculating stats like the number of laps taken, top speed and total distance traveled. 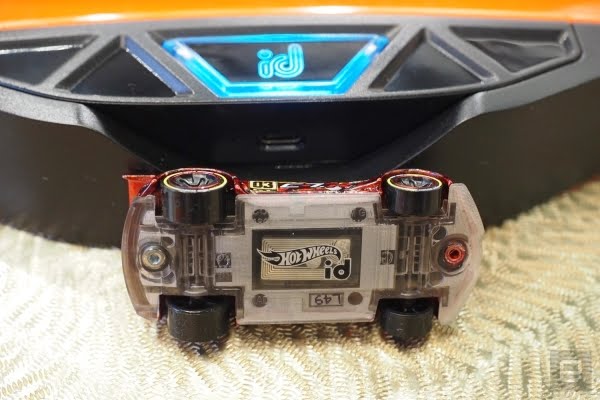 You register the cars with the app by tapping the vehicle against the NFC reader on your device. Or, if your phone or tablet doesn’t have a reader, the “race portal” piece of smart track can also do the job. And the track itself is, in fact, smart: The thick, sturdy pieces connect to each other via USB, so they can communicate back to the app which pieces are being used and what the track looks like, as well as helping to guide kids through the build process step by step. Regular (read: dumb) track pieces from standard Hot Wheels sets can be attached as well, though the system won’t be able to import data on these. The app isn’t required to play with the cars every single time; the race portal will store the data in the meantime and simply transfer the next time it syncs with a device. 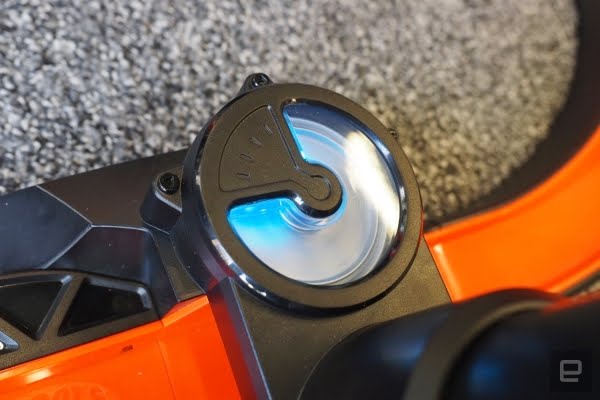 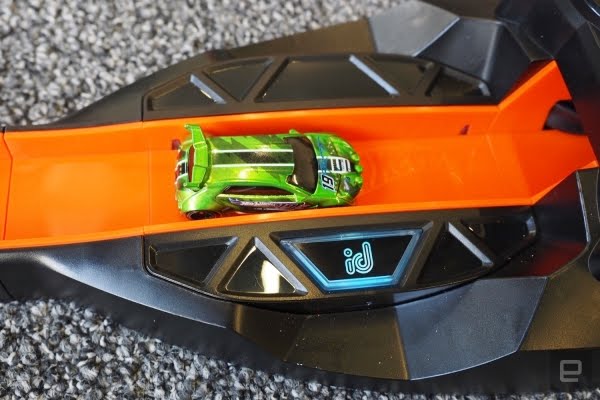 But the app isn’t only about keeping tabs on your collection and helping you build tracks. It will issue racing challenges for you to complete — make X amount of laps, or reach a certain speed — and then dish out rewards as you complete them. Rewards for what, you say? Well, in addition to the real-world play of the cars and track, there’s also a game in the app where you race virtual copies of your collection on virtual tracks. The rewards consist of power-ups that can be used to supercharge your cars in the game, as well as unlocking exclusive in-game content like additional vehicles.

It’s a fast-paced but otherwise basic racing game, where you steer by tapping left or right on the screen, with a dual tap activating the available power-ups. And it’s free to play, like a lot of mobile games kids are into. And, as in many of those games, it has in-app purchases (boo) and a cooldown period where you won’t be able to do anything. But, instead of forcing kids to pay up to continue playing, Hot Wheels ID sends them to the toys themselves. When someone plays with their cars in the real world, it recharges the car for more racing in the virtual world. 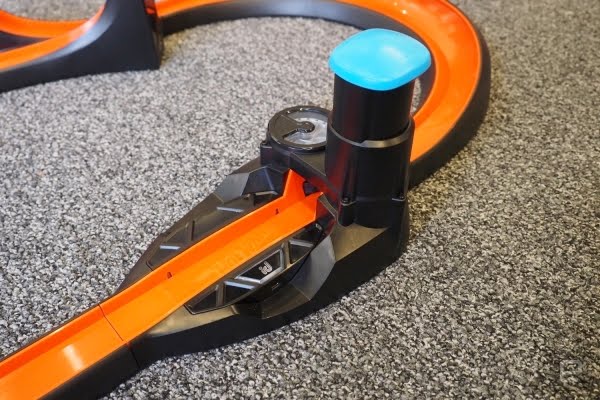 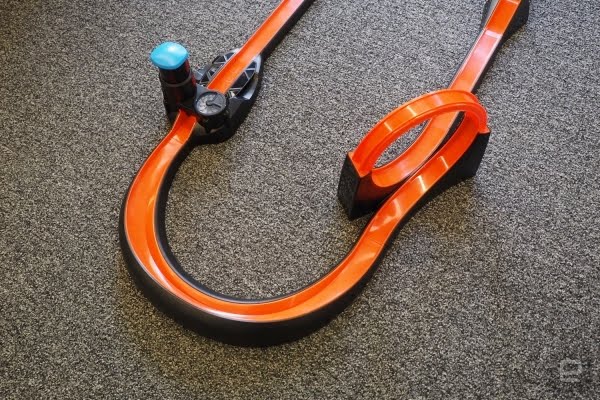 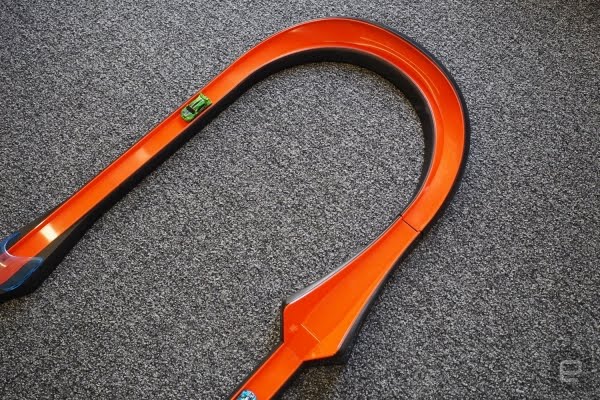 The whole idea is to make sure that kids continue to play with the toys even with all the cool features of the app. After all, the heart of the Hot Wheels brand is building a cool car collection. And Hot Wheels ID has plenty to offer in that regard: It will launch with eight vehicles to start, but eventually you’ll have 51 different cars to choose from, including real-world models like the Corvette C7R and Aston Martin One-77, along with fantasy designs like the Motosaurus and the Batmobile. 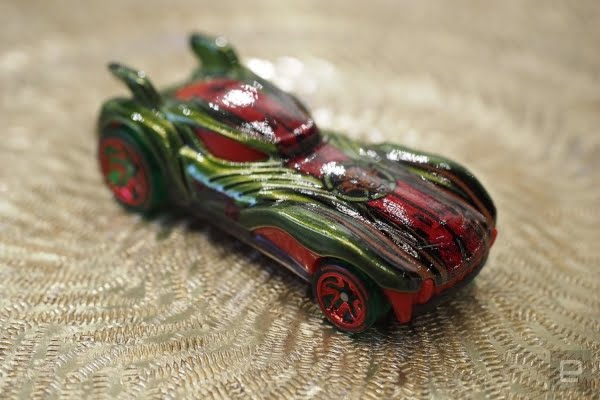 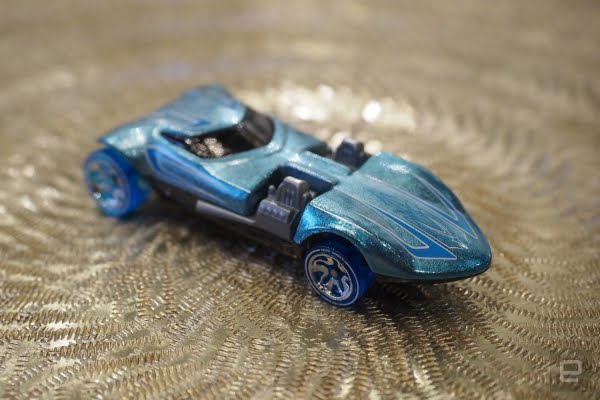 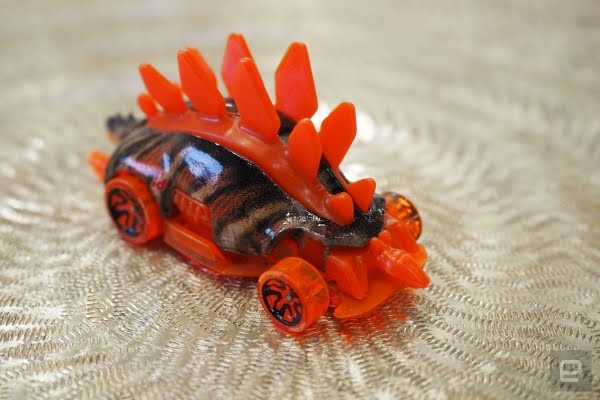 Unfortunately, amassing a collection won’t come cheap. Each NFC-enabled vehicle will cost $7, though they are better constructed than the $1 blister-packed cars you often find in bins at your local toy store. The Race Portal that lets you scan and track the cars will be sold on its own for $40 with two exclusive vehicles included. But if you really want to go the distance with Hot Wheels ID, the Smart Track set comes with all the USB-connected pieces plus two exclusive vehicles, and that will run you $180. It even comes in a box that was designed to be used for longterm storage.

You can pick all of these up at the Apple Store today, as well as download the iOS app in the App Store. Android users will get their chance at ID next month on Prime Day, when the app launches on Amazon and Google Play. People who’d rather buy this in a non-Apple physical store will also get a shot when it reaches Target starting in the fall. 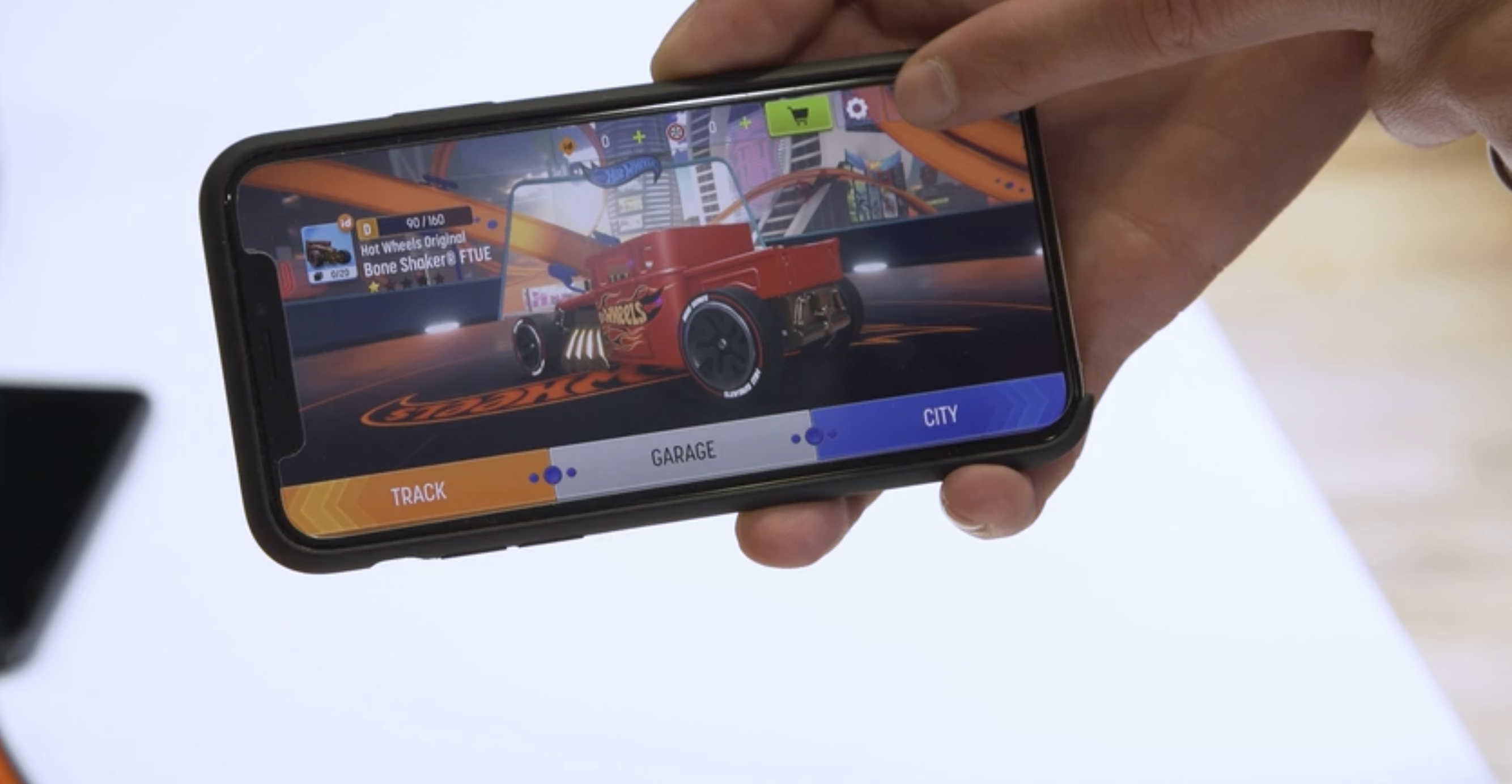