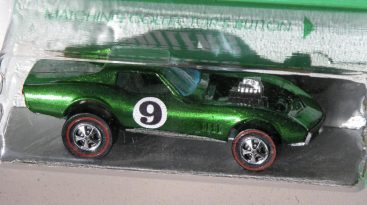 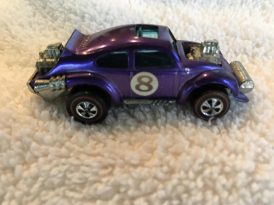 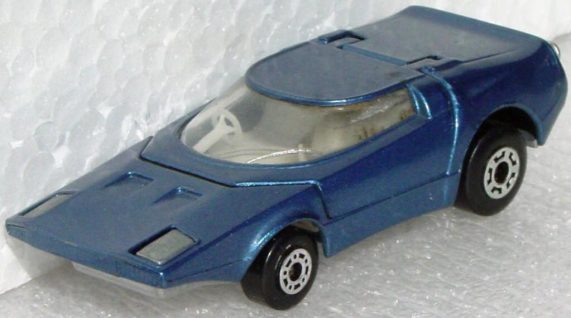 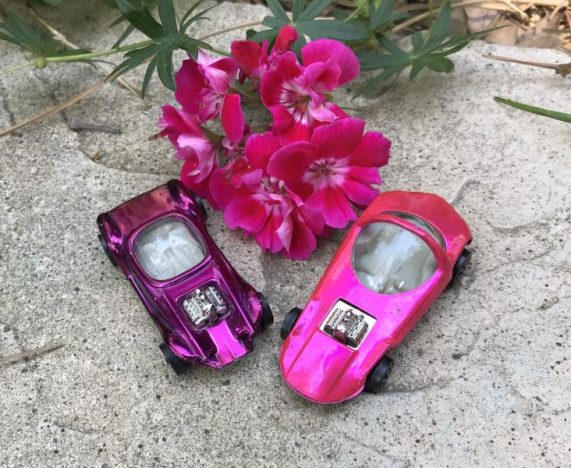 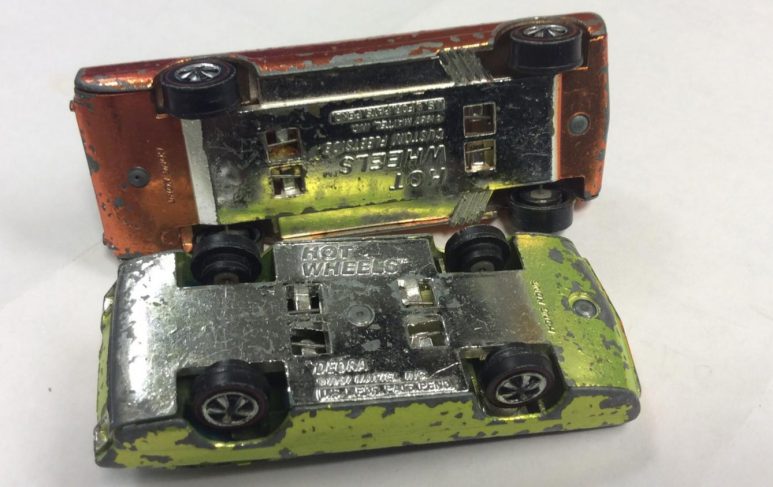 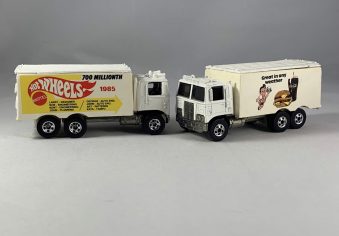 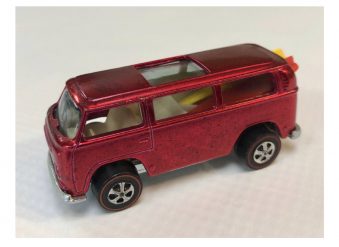 Every year, Mattel sells nearly $1B worth of new toy cars to kids. But on the secondary market, adult collectors and dealers reign supreme.

By day, Bruce Pascal is a successful commercial real estate executive who brokers multimillion-dollar deals in the nation’s capital.

By night, he buys $5k Hot Wheels cars on eBay.

The 59 year old owns what is considered the world’s most valuable Hot Wheels collection, a staggering array of 7k rare toy cars that are collectively insured for $1.5m. Many are prototypes that were acquired from former Mattel employees, including a pink 1969 Rear-Loading Beach Bomb valued at ~$150k.

Five decades ago, Hot Wheels were America’s hottest new plaything. Today, the children of the ‘60s are fueling a small but mighty collectors’ market that wheels and deals in obscure corners of the internet.

Pascal is one of a handful of super collectors, dealers, and middlemen who pay top dollar for the rarest cars. It’s a colorful group that includes an ex-BMX stunt rider, an auto mechanics teacher, and a man who owns a geese-removal business.

How did one-time 59-cent toy cars become 5-figure collectibles? And what drives grown men and women to spend princely sums chasing them?

Fresh off the monstrous success of the Barbie doll in 1959, Mattel founders Ruth and Elliot Handler saw an opportunity in the market for mini toy cars.

So, they poached car designers from GM, Chrysler, and Ford and charged them with creating custom-made, brilliantly colored hot rods. The first set of Hot Wheels — dubbed the “Sweet 16”— hit shelves on May 18th, 1968, for $0.59 each.

That year alone, Mattel sold 16m of them. 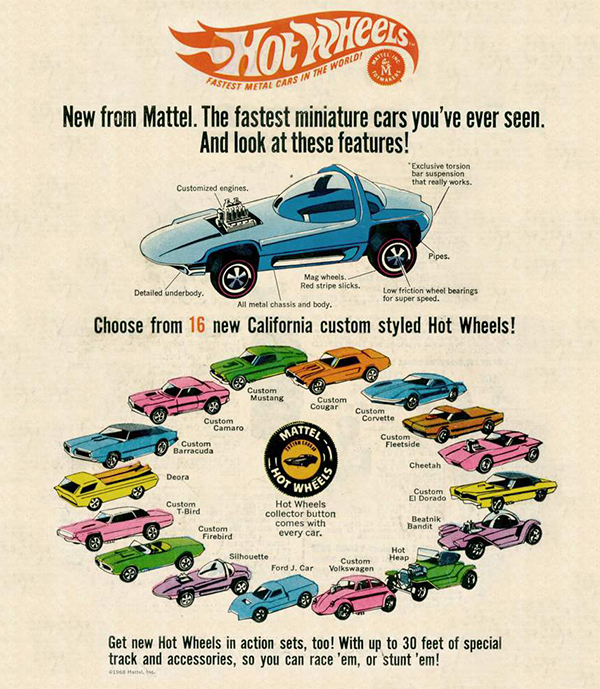 A promotional poster for the first set of Hot Wheels cars boasts of their speed, custom styling, and special “redline” wheels (via Mattel)

During the ‘60s and ‘70s, some 41m children raced Hot Wheels cars down the signature bright orange tracks.

As these children grew older and started having kids of their own, a market for adult Hot Wheels collectors began to emerge.

Mattel capitalized on this new demographic, launching its own paid membership club for collectors, which later grew to 100k members.

The company also debuted a “Treasure Hunt” series in 1995 — runs of limited-edition cars that were randomly stocked on department store shelves around the country. Grown men were soon barreling over kids at JCPenney outlets, fist-fighting over mini T-Birds, Camaros, and VW Bugs. Those who were forceful enough to snag one for a few bucks could flip it on the collector’s market for $20-$80. 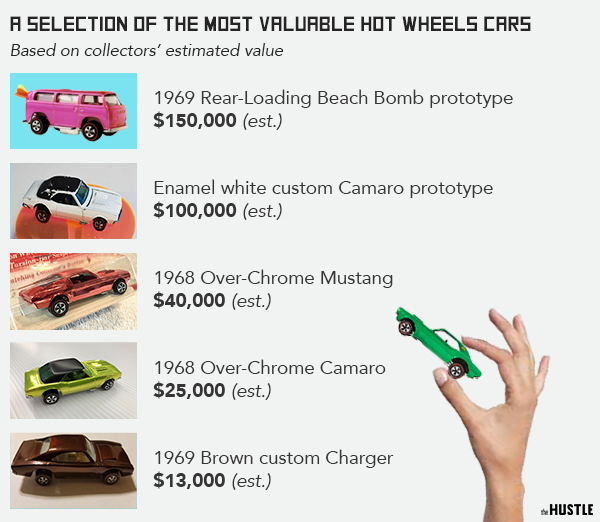 Today, this collector’s market is alive and well.

In 2019, Hot Wheels brought in a record-high $926m in gross sales for Mattel. Every second, 16 cars roll off the production line — and since 1968, the company has released more than 6B cars in 20k different models.

Mattel says there are some 15m “avid collectors” who average 1,550 cars each. Around 90% of these collectors go after the newer models, or “mainlines.” The remaining 10% — almost exclusively made up of men in their 50s and 60s — is focused on the lucrative “redline” cars produced between 1968 and 1977.

On eBay and other auction sites, certain iterations of these cars — old or new — can sell for thousands:

As one dealer told The Hustle: “The right model can pay for your kid’s college tuition.” But first, you have to find a collector crazy enough to shell out for it.

Bruce Pascal’s home office in Potomac, Maryland, is a testament to his obsession. 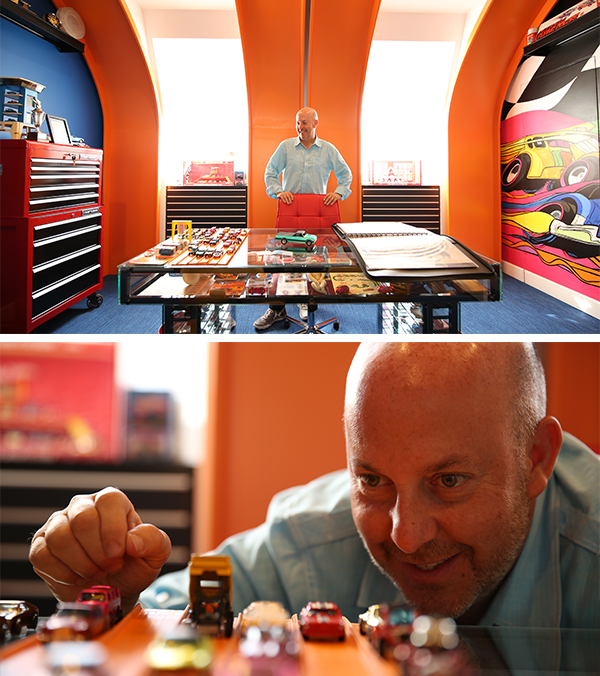 Pascal’s route into the hobby is a familiar one among serious collectors: He fell in love with Hot Wheels in 1968, at the age of 7. His cars eventually ended up in a cigar box in the attic, where they gathered dust until he retrieved them 30 years later.

Overwhelmed by nostalgia, Pascal quickly went from 0 to 60.

He voraciously consumed price guides, studied the market, and started running ads in newspapers offering to buy others’ vintage Hot Wheels collections for 50% to 70% of market value.

A mere 6 months into collecting, the real estate broker secured his place in toy car lore by plunking down ~$70k for the “Holy Grail” of Hot Wheels: A pink 1969 Rear-Loading Beach Bomb. At the time, it was 3x what any Hot Wheels car had previously sold for — and it opened the floodgates for 5-figure deals.

Today, the cars on the open market aren’t enough to satiate Pascal.

He spends his time tracking down former Mattel employees who might be willing to part with ultra-rare unreleased prototypes. He’s spent hundreds of thousands of dollars acquiring these cars — sometimes, with giant bags of cash.

Sometimes, the sellers aren’t even aware of what they have until Pascal informs them that the old toys in their possession are worth $25k. Recently, a seller broke down in tears when Pascal handed him a check for $12k. A few forgotten toys turned into a new roof for the man’s house.

“I’m like the Antiques Roadshow that shows up to their door,” he says. 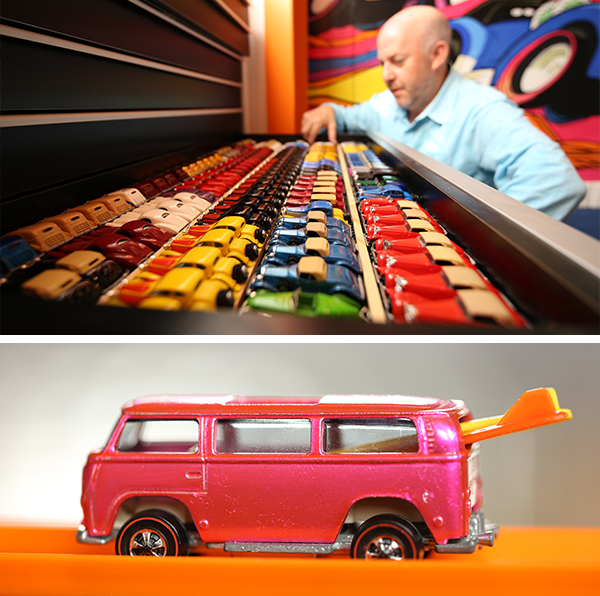 Pascal says the most valuable Hot Wheels cars are the famed Rear-Loading Beach Bombs, which were axed in 1969 before they hit the market. Only 48 are known to exist, and they typically go for $20k to $50k.

Then there are the “Over-Chrome” Hot Wheels, a run of ~30 or so cars with an especially brilliant sparkle produced in 1968. Most go for $20k to $30k, but a particularly handsome strawberry-colored Mustang once fetched $50k.

The estimated value of cars can be highly subjective, and contingent on what a small pool of buyers is willing to pay at any given time.

“The value often comes down to a magical mix of condition, casting, and color,” he says. “In the Hot Wheels world, there are endless variations of paint, interiors, and wheels. You really have to know what you’re looking at.”

More recently, COVID-19 has gotten Pascal ruminating on mortality and the fate of his Hot Wheels. He’s spent the last 6 months carefully tabulating the value of each car in an Excel spreadsheet.

“There might only be 10 people in the world who know the value of what I have, so if I drop dead without documenting everything, I’m screwed.”

Pascal isn’t the only guy super collector with a pricey heap of toy cars.

Sid Belzberg, a Canadian businessman and chess master, built up a $700k+ collection that included the first Hot Wheels car ever made (a red Camaro). Mike Strauss, a food salesman, sold 30k cars for an estimated $800k-$1m in 2011. Larry Wood, one of the original Hot Wheels designers, auctioned off his legendary stash for somewhere in the range of $600k.

But other collectors focus more on breadth than valuation. 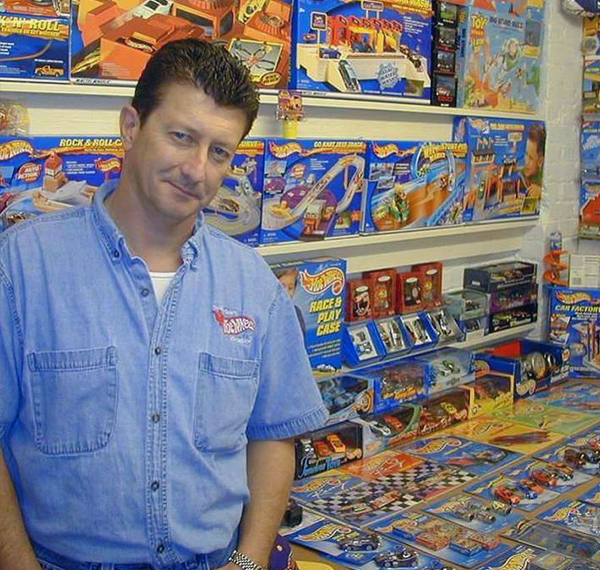 When I called Zarnock this week, he was cruising in a Chevy S10 hot rod that he built from scratch. For a car buff like him, Hot Wheels have been a life-long love — so much so that he stopped at a toy store to buy some in the middle of the first date with his now-wife.

He started seriously collecting the toys in the mid-90s, shortly after his son was born. “Most of us older collectors are trying to buy our childhood back,” says the 62 year old.

Zarnock has written 14 books on Hot Wheels and hosts a YouTube channel where he riffs on topics like the nuances of special edition Spongebob Squarepants cars.

His collection includes not just toy cars — Beatnik Bandits, Silhouettes, AC Cobras, Corvettes — but paraphernalia like Hot Wheels underwear, Hot Wheels speakers, and Hot Wheels roller skates. If the logo is on it, he probably has it.

He won’t place a hard value on his collection, but guesses it’s worth somewhere in the vicinity of $750k.

“If I died tomorrow, there’s no way I’d get back what I put into it,” he says. “My wife would probably sell them at a garage sale for $0.25 apiece.”

The Indiana Jones of Hot Wheels

Rare Hot Wheels can be tough to find, so super collectors sometimes have to rely on the scavengings of expert dealers like Bob Young.

Based outside of Philadelphia, Young is a man of many talents. He spent years directing physician’s assistant courses while simultaneously launching a geese-removal franchise with a team of Border Collies. Now 60 and semi-retired, he runs the website Redline Archeology in between joy rides in his Ferrari California. 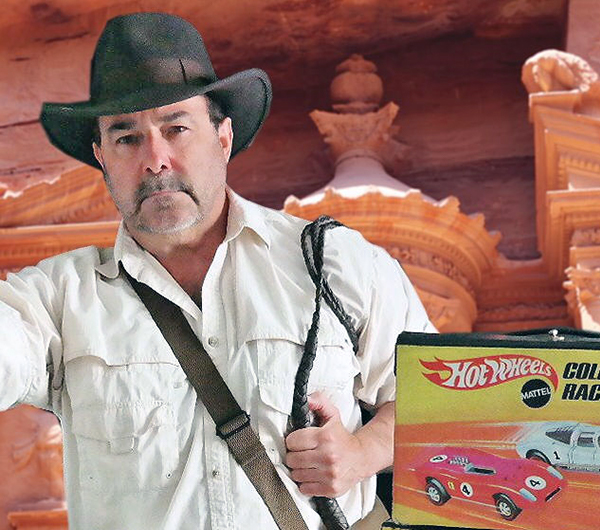 Young is something of a Hot Wheels broker: He specializes in hunting down vintage, one-owner collections that have been sitting around for decades in basements, attics, closets, garages, and storage units.

“Basically, I’m like the Indiana Jones of Hot Wheels,” he says.

Young got his start in the mid-90s by running ads in local papers. Then a struggling high school athletic trainer, he netted so much cash reselling Hot Wheels that he was able to pay off his school loans and install a backyard pool.

Today, most of his leads come through SEO traffic to his website.

Once in touch with a seller, he’ll appraise the collection and offer 50% to 70% of its market value. He’ll then contact his buddy Woody Itson, a retired BMX stunt rider and Hot Wheels collector in Dallas, who buys his items in bulk for 75% of the market value and sells the cars individually.

In one recent deal, Itson bought a collection from Young for $32.5k. Young doubled his investment and Itson was able to net a $9k profit.

Young prefers to incubate himself from serious collectors, who he says can sometimes be pretentious, demanding, and aggressive.

“It’s hard to find people to trust in the Hot Wheels world,” he says. “You’ve got a bunch of charlatans out there, people who will slit your throat to get their hands on these cars.” 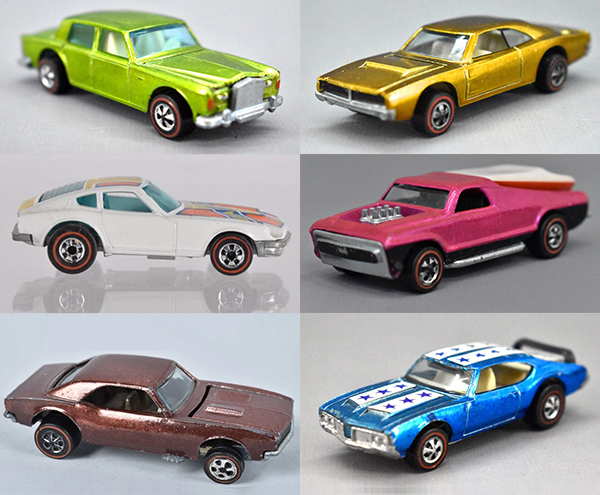 Young is less than convinced about the valuations some collectors put on their personal collections.

“A lot of these guys pay way too much money, then have a real surprise when they find out what they go for on the market,” he says. “Hot Wheels are like stocks: The price fluctuates constantly, based on what other people are paying.”

But most of the hobby’s big spenders will tell you that it’s not all about the benjamins.

“My grandfather was one of the foremost automobile historians in the US,” says Pascal. “If he could see my collection, I’m sure he’d smile. At the end of the day, I’m in it for the love of the cars.”